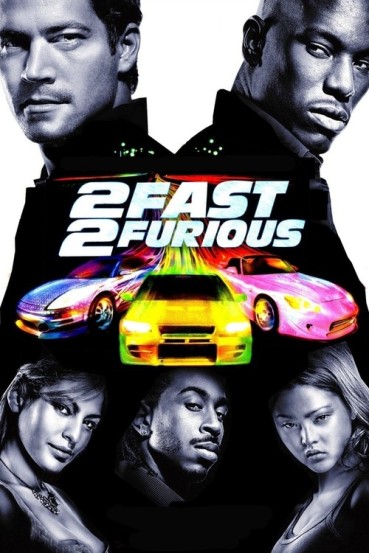 After letting his mark Toretto go free, Brian has fallen out of favor with the LAPD and been on the run ever since. When a dangerous drug lord emerges in Miami, he is given the opportunity to redeem himself by going undercover yet again. This time Brian partners with old friend Roman (Tyrese) to bring down the bad guy and clear his criminal record.

I personally think that 2 Fast 2 Furious is the only film in the series that can really stand on its own in terms of plot and continuity. Enough allusions are made to the first film that it really just comes across as Brian’s past, which is all very believable and natural.

John Singleton directed this film and if you know anything about his body of work (Oscar-nominated Boyz N the Hood, Poetic Justice, Baby Boy, Four Brothers), you know his films have a style and flavor all their own. I think he was a great match for the series and it’s surprising to me that he didn’t go on to direct any others.

The supporting characters in 2 Fast 2 Furious are pretty cool: Ludacris debuts in his role as Tej, a resourceful jack-of-all trades businessman. There’s also FBI agent Monica Fuentes, played by Eva Mendes, who Brian and Roman work with. Suki (Devon Aoki) and Jimmy (Jin Au-Yeung) are also interesting characters and I wouldn’t mind seeing them pop up again at some point in the future (cast reunion in Fast 10??).

Another memorable character is the villainous Carter Verone, played by the completely underrated actor Cole Hauser. Verone is a scary dude and a formidable opponent for Brian and Roman due to his deep connections; he has Miami PD detectives on his payroll and uses them to get what he wants.

One of the more memorable scenes of the movie involves Carter threatening a detective’s life to get him to cooperate. He uses a live rat and a blow torch. Let’s just say it’s a little graphic and a little disturbing- he’s not a guy to mess with.

Another memorable  scene is the car scramble Brian and Roman orchestrate to confuse the local police. They get dozens of racers to act as decoys and the two end up successfully getting away. It’s creative to say to the least.

Have you seen the latest trailer for The Fate of the Furious? Share your thoughts in the comments below!